I like to add Leadership to the E-Myth pyramid. Leadership can happen at any level.

I’m writing this post for my bestest friend who commented the other day about finding herself president of an organization when she didn’t know much about how it worked. While understanding what an organization does and how it does it is important, the president’s role determines whether or not it is critical to know everything from the get-go. Some presidents are leaders, others are managers.

Now I have no doubt that Suna [oops, I wasn’t supposed to name names in this post] can learn how the organization works and do it very quickly. But that’s really only critical if she views the role as management. If it’s a leadership position, it’s more important for her to build consensus (something she’s really, really good at) and point the direction.

Leaders identify what to do.
Managers figure out how to do it.
And technicians (workers) focus on the tasks needed to do it.

END_OF_DOCUMENT_TOKEN_TO_BE_REPLACED

Carlton changed his situation for the better by being with people who support him in his goal of puppyness.

If you want to improve, embrace change. After all, improvement is change.

Everyone from (Ben Franklin to Albert Einstein to Fred Zamberletti of the Vikings) has been credited with the truism that expecting different results from the same actions is just crazy. But year-after-year, most of us continue to do exactly this. Especially when it comes to our “friends.” I put friends in quotes because our “friends” aren’t necessarily our friends.

What does that mean?

END_OF_DOCUMENT_TOKEN_TO_BE_REPLACED 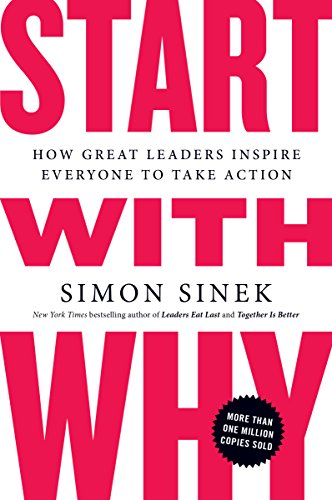 Lots to think about in this book.

I’ve been slowly reading Start with Why: How Great Leaders Inspire Everyone to Take Action by Simon Sinek. I’m reading it slowly, so the points he makes sink in.

The current chapter talks a lot about Apple. It turns out that when they “introduced” the iPod, a portable MP3 player had already been on the marked for almost two years. Instead of talking about what they made (technical specs), their advertising talked about why they made it and why you would want to use it. Remember the dancing silhouettes? I sure do.

That got me thinking. Although we’ve talked about our Why, we don’t focus on it. There are lots of other people doing what we do. Why would you want to do business with us rather than them?

Does it all come down to money? Of course not! We’ve even done deals where the seller told us flat out that we weren’t the highest offer. There were other reasons Why they did business with us.

It turns out the reasons people want to do business with us are the same reasons we have for being in business: END_OF_DOCUMENT_TOKEN_TO_BE_REPLACED

If you want more information on mindset and how to change it, I highly recommend this book, which focuses on obtaining a growth mindset.

I’ve been thinking a lot about mindset lately. Simply put, mindset is your basic attitude — the way you look at the world. Most of what I’ve been reading categorizes mindset into two dichotomous groups:

There’s a lot of overlap between these groups. Perhaps overlapping tendencies might be a better way to say it. For example, people with a fixed mindset are more likely to also show characteristics of people with a scarcity mindset. Check it out.

People with an abundance mindset look at ways to grow their income or the economy. When they want something, they don’t ask, “can I afford this?” They ask, “how can I afford this?” As Robert Kiyosaki suggests, if you want to new car, you don’t buy the car; you buy a rent house that makes the payments on the car. That way when the car is paid for, you have both.

People with the scarcity mindset tend to look at the economy and their income as being fixed objects. “You can’t have more unless I have less.” They don’t understand the difference between good and bad debt, between debt that makes you money and debt that costs you money. I ran into this a lot when I was president of my church. Instead of focusing on how to raise enough money to fund the program is the church held as its core values, most people focused on how much money the church already had or on pledges.

The growth/fixed mindset is probably more familiar to most people. The fixed mindset says you are what you are. You’re either smart or dumb, graceful or klutzy. And there’s no way to change. Failures define your limits.

The growth mindset takes every failure as an opportunity to grow. If you don’t understand a concept, learn everything you can about it until you do. If you lose money on a deal, figure out why and don’t do that again. If you suck at an activity, keep practicing until you reach your desired level of competence.

But here’s the thing: you get to choose your mindset. It’s not usually easy. Like recovering from any adversity or addiction, changing your mindset is a daily activity fraught with setbacks. But in the end, it’s worth doing. Happiness and abundance abound.

Here at Hermit Haus, we work very hard at focusing on our opportunities for growth and for increasing our abundance. These are our core values. The cool thing about the abundance mindset is that we don’t believe we can only get more by taking away from someone else. We find a way that we all come out ahead. It’s not a win-lose scenario; it’s always win-win.

Lee and Chris Robinson at the Ignite real estate convention in Las Vegas.

I know I’ve mentioned it on Facebook but not here. Sue Ann and I are spending our wedding anniversary at a real estate convention in Las Vegas. Some of you who know me are asking, “What are you doing in Las Vegas? You don’t even like to gamble.” Learning.

These big conventions are about changing mindset. My first big change was from a scarcity mindset (I’ve got to be careful not to spend a dime I don’t have to.) to a growth mindset (If I hire someone to do that, I can probably do a few more deals, and the income from those deals will pay for that person’s time.). That shift in thinking is what enabled me to form Hermit Haus. I would rather have half of 50 deals than all of five deals.

Well, I’ve undergone another mindset shift thanks to Chris Robinson of R3 Coaching. He’s an executive coach to one of my mentors, Paul Esajian.

I don’t mention it here a lot, but Suna and I both have advanced degrees. We’re proud of our education and of our background as trainers and instructional designers. Being proud of knowledge, we’re always looking for new data. I can’t count how many times I’ve read or heard a conference presenter drop a fact or a strategy and my reaction was, “Yeah. I’ve heard that before.”

In the midst of an very clever and entertaining speech on managing personal development, Chris stopped me in my tracks. “I’m not going to tell you anything new,” he said. I didn’t care; he is one of the best public speakers I’ve ever heard.

That simple question floored me. As a trainer, I’ve known that there is often a big gap between knowing how to do something and being able to do it. Here I was caught in my own trap. It’s know do you know something; it’s can you apply that knowledge.

Near the end of the talk, Chris said, “When you go to a conference or a class or read something, ask yourself, ‘What’s the one thing I can take away from that and put into practice?'”

For me it’s that one simple question. “How well do I do that?”